The Consistency dimension and distribution-dependent learning from queries: (extended abstract with appendices) 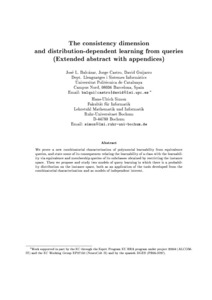 Guijarro Guillem, David
Simon, Hans-Ulrich
Document typeExternal research report
Rights accessOpen Access
Abstract
We prove a new combinatorial characterization of polynomial learnability from equivalence queries, and state some of its consequences relating the learnability of a class with the learnability via equivalence and membership queries of its subclasses obtained by restricting the instance space. Then we propose and study two models of query learning in which there is a probability distribution on the instance space, both as an application of the tools developed from the combinatorial characterization and as models of independent interest.
CitationBalcazar, J. L., Castro, J., Guijarro, D., Simon, H. "The Consistency dimension and distribution-dependent learning from queries: (extended abstract with appendices)". 1999.
Is part ofR99-38
URIhttp://hdl.handle.net/2117/93088
Collections
Share: