The syntax of BLOOM99 schemas 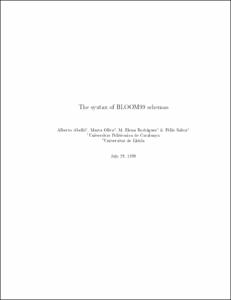 Oliva, M
Rodríguez González, María Elena
Saltor Soler, Félix Enrique
Document typeExternal research report
Rights accessOpen Access
Abstract
The BLOOM (BarceLona Object Oriented Model) data model was developed to be the Canonical Data Model (CDM) of a Federated Database Management System prototype. Its design satisfies the features that a data model should have to be suitable as a CDM. The initial version of the model (BLOOM91) has evolved into the present version, BLOOM99. This report specifies the syntax of the schema definition language of BLOOM99. In our model, a schema is a set of classes, related through two dimensions: the generalization/specialization dimension, and the aggregation/decomposition dimension. BLOOM supports several features in each of these dimensions, through their corresponding metaclasses. Even if users are supposed to define and modify schemas in an interactive way, using a Graphical User Interface, a linear schema definition language is clearly needed. Syntax diagrams are used in this report to specify the language; an alternative using grammar productions appears as Appendix A. A possible graphical notation is given in Appendix B. A comprehensive running example illustrates the model, the language and its syntax, and the graphical notation.
CitationAbello, A., Oliva, M., Rodriguez, M., Saltor, F. "The syntax of BLOOM99 schemas". 1999.
Is part ofLSI-99-34-R
URIhttp://hdl.handle.net/2117/93082
Collections
Share: