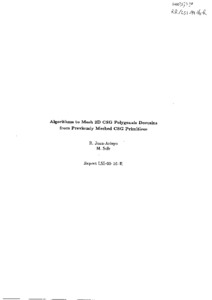 Document typeExternal research report
Rights accessOpen Access
Abstract
In this work we report on two algorithms that mesh a 2D CSG poligonal domain built from previously meshed primitives. The resulting mesh is computed from the component meshes. Both algorithms first compute the set of cells of each mesh that overlap. One algorithm uses a propagation technique. Every two nodes in the overlapping area that are closer enough are collapsed into a new node. The final state is reached when nodes no longer collapse. The other algorithm is based on a relaxation technique. An energy function is associated with each node in the areas where the meshes overlap. The minimization of the total energy function leads the nodes to an steady state that defines the final mesh. We give some examples that illustrate how the algorithms work.
CitationJoan-Arinyo, R., Solé, M. "Algorithms to mesh 2D CSG polygonal domains from previously meshed CSG primitives". 1999.
Is part ofLSI-99-16-R
URIhttp://hdl.handle.net/2117/93018
Collections
Share: