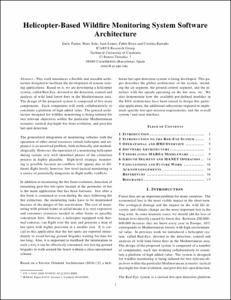 This work introduces a flexible and reusable architecture designed to facilitate the development of remote sensing applications. Based on it, we are developing a helicopter system, called Red-Eye, devoted to the detection, control and analysis of wild land forest fires in the Mediterranean area. The design of the proposed system is composed of five main components. Each component will work collaboratively to constitute a platform of high added value. The general architecture designed for wildfire monitoring is being tailored for two relevant objectives within the particular Mediterranean scenario: tactical day/night fire front evolution, and post-fire hot-spot detection. The generalized integration of monitoring vehicles with the operation of other aerial resources (attack helicopter and airplanes) is an unsolved problem, both technically and methodologically. However, the operation of a monitoring helicopter during certain very well identified phases of the extinction process in highly plausible. High-level strategic monitoring is possible because no-conflicts will appear due to different flight levels; however, low-level tactical monitoring is a source of potentially dangerous in-flight traffic conflicts. In addition to monitoring the fire front evolution, detection of remaining post-fire hot-spots located at the perimeter of fire is the main application that has been foreseen. Just after a fire front is contained or even during the days following the fire extinction, the monitoring tasks have to be maintained because of the danger of fire reactivation. The cost of monitoring with ground teams or aerial means it is very expensive and consumes resources needed in other fronts or possibly concurrent fires. However, a helicopter equipped with thermal cameras, can flight over the area and generate a map of hot spots with higher precision at a smaller cost. It is crucial in this application that the hot spots are reported immediately to avoid having ground brigades wai- - ting for data for too long. Also, it is important to feedback the information in such a way it can be effectively consumed, not forcing ground brigades to walk around the forest without a clear operational scheme. Based on a Service Oriented Architecture (SOA) a heliborne hot-spot detection system is being developed. This paper describes the global architecture of the system, including the air segment, the ground control segment, and the interface with the squads operating on the fire area, etc. We also demonstrate how the available pre-defined modules in the SOA architecture have been reused to design this particular application, the additional subsystems required to implement specific hot-spot mission requirements, and the overall system / end-user interface.
CitationPastor, E. [et al.]. Helicopter-based wildfire monitoring system software architecture. A: IEEE Aerospace Conference. "IEEE Aerospace Conference 2010". Big Sky, MT: 2010, p. 1-18.
URIhttp://hdl.handle.net/2117/9247
DOI10.1109/AERO.2010.5446807
ISBN978-1-4244-3887-7
Publisher versionhttp://ieeexplore.ieee.org/xpls/abs_all.jsp?arnumber=5446807&tag=1