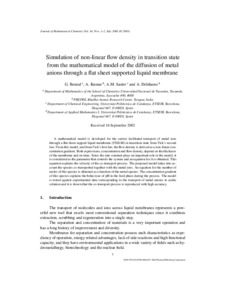 A mathematical model is developed for the carrier facilitated transport of metal ions through a flat sheet support liquid membrane (FSSLM) in transition state from Fick’s second law. From this model, and from Fick’s first law, the flow density is derived as a non-linear concentration gradient. Both expressions, concentration and flow density, depend on the thickness of the membrane and on time. Since the rate constant plays an important role in the model, it is considered as the parameter that controls the system and an equation for it is obtained. This equation explains the velocity of the co-transport process. The proposed model takes into account the species co-transported together with the metal ions. An equation for the number of moles of this species is obtained as a function of the metal species. The concentration gradient of this species explains the behaviour of pH in the feed phase during the process. The model is tested against experimental data corresponding to the transport of metal anions in acidic solution and it is shown that the co-transport process is reproduced with high accuracy.
CitationBenzal, Ma. Graciela; Kumar, Aditya; Sastre, Ana-Maria; Delshams, Amadeu. “Simulation of non-linear flow density in transition state from the mathematical model of the diffusion of metal anions through a flat sheet supported liquid membrane”. Journal of mathematical chemistry, 2003, vol. 34, núm. 1-2, p. 1-27.
URIhttp://hdl.handle.net/2117/924