Complex behaviour and predictability of the European dry spell regimes 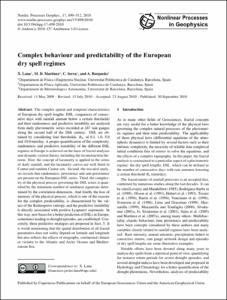 Burgueño, August
Document typeArticle
Rights accessOpen Access
Abstract
The complex spatial and temporal characteristics of European dry spell lengths, DSL, (sequences of consecutive days with rainfall amount below a certain threshold) and their randomness and predictive instability are analysed from daily pluviometric series recorded at 267 rain gauges along the second half of the 20th century. DSL are obtained by considering four thresholds, R0, of 0.1, 1.0, 5.0 and 10.0 mm/day. A proper quantification of the complexity, randomness and predictive instability of the different DSL regimes in Europe is achieved on the basis of fractal analyses and dynamic system theory, including the reconstruction theorem. First, the concept of lacunarity is applied to the series of daily rainfall, and the lacunarity curves are well fitted to Cantor and random Cantor sets. Second, the rescaled analysis reveals that randomness, persistence and anti-persistence are present on the European DSL series. Third, the complexity of the physical process governing the DSL series is quantified by the minimum number of nonlinear equations determined by the correlation dimension. And fourth, the loss of memory of the physical process, which is one of the reasons for the complex predictability, is characterized by the values of the Kolmogorov entropy, and the predictive instability is directly associated with positive Lyapunov exponents. In this way, new bases for a better prediction of DSLs in Europe, sometimes leading to drought episodes, are established. Concretely, three predictive strategies are proposed in Sect. 5. It is worth mentioning that the spatial distribution of all fractal parameters does not solely depend on latitude and longitude but also reflects the effects of orography, continental climate or vicinity to the Atlantic and Arctic Oceans and Mediterranean Sea.
CitationLana, F. [et al.]. Complex behaviour and predictability of the European dry spell regimes. "Nonlinear processes in geophysics", Setembre 2010, vol. 17, núm. 5, p. 499-512.
URIhttp://hdl.handle.net/2117/9237
DOI10.5194/npg-17-499-2010
ISSN1607-7946
Collections
Share: