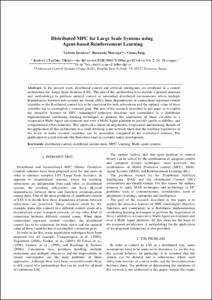 Document typeConference report
Rights accessOpen Access
European Commission's projectWIDE - Decentralized and Wireless Control of Large-Scale Systems (EC-FP7-224168)
Abstract
In the present work, distributed control and artificial intelligence are combined in a control architecture for Large Scale Systems (LSS). The aim of this architecture is to provide a general structure and methodology to perform optimal control in networked distributed environments where multiple dependencies between sub-systems are found. Often these dependencies or connections represent control variables so the distributed control has to be consistent for both subsystems and the optimal value of these variables has to accomplish a common goal. The aim of the research described in this paper is to exploit the attractive features of MPC (meaningful objective functions and constraints) in a distributed implementation combining learning techniques to perform the negotiation of these variables in a cooperative Multi Agent environment and over a Multi Agent platform to provide speed, scalability, and computational effort reduction. This approach is based on negotiation, cooperation and learning. Results of the application of this architecture to a small drinking water network show that the resulting trajectories of the levels in tanks (control variables) can be acceptable compared to the centralized solution. The application to a real network (the Barcelona case) is currently under development.
CitationJavalera Rincón, V.; Morcego Seix, B.; Puig Cayuela, V. Distributed MPC for large scale systems using agent-based reinforcement learning. A: IFAC Symposium on Large Scale Systems Theory and Applications. "Proceedings of 12th IFAC Symposium on Large-Scale Systems: Theory and Applications". 2010, p. 1-6. ISBN 978-2-915913-26-2.
URIhttp://hdl.handle.net/2117/9208
ISBN978-2-915913-26-2
Publisher versionhttp://www.ifacpapersonline.com
Collections
Share: