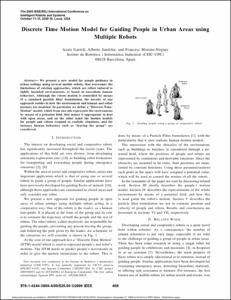 Document typeConference report
PublisherIEEE Press. Institute of Electrical and Electronics Engineers
Rights accessOpen Access
Abstract
We present a new model for people guidance in urban settings using several mobile robots, that overcomes the limitations of existing approaches, which are either tailored to tightly bounded environments, or based on unrealistic human behaviors. Although the robots motion is controlled by means of a standard particle filter formulation, the novelty of our approach resides in how the environment and human and robot motions are modeled. In particular we define a “Discrete-Time-Motion” model, which from one side represents the environment by means of a potential field, that makes it appropriate to deal with open areas, and on the other hand the motion models for people and robots respond to realistic situations, and for instance human behaviors such as “leaving the group” are considered.
CitationGarrell, A.; Sanfeliu, A.; Moreno, F. Discrete time motion model for guiding people in urban areas using multiple robots. A: IEEE/RSJ International Conference on Intelligent Robots and Systems. "IROS 2009 : 2009 IEEE/RSJ International Conference on Intelligent Robots and Systems". St. Louis, MO: IEEE Press. Institute of Electrical and Electronics Engineers, 2009, p. 486-491.
URIhttp://hdl.handle.net/2117/9176
ISBN978-1-4244-3804-4
Publisher versionhttp://dx.doi.org/10.1109/IROS.2009.5354740
Collections
Share: