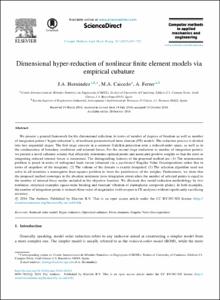 Document typeArticle
Rights accessOpen Access
European Commission's projectCOMP-DES-MAT - Advanced tools for computational design of engineering materials (EC-FP7-320815)
Abstract
We present a general framework for the dimensional reduction, in terms of number of degrees of freedom as well as number of integration points (“hyper-reduction”), of nonlinear parameterized finite element (FE) models. The reduction process is divided into two sequential stages. The first stage consists in a common Galerkin projection onto a reduced-order space, as well as in the condensation of boundary conditions and external forces. For the second stage (reduction in number of integration points), we present a novel cubature scheme that efficiently determines optimal points and associated positive weights so that the error in integrating reduced internal forces is minimized. The distinguishing features of the proposed method are: (1) The minimization problem is posed in terms of orthogonal basis vector (obtained via a partitioned Singular Value Decomposition) rather that in terms of snapshots of the integrand. (2) The volume of the domain is exactly integrated. (3) The selection algorithm need not solve in all iterations a nonnegative least-squares problem to force the positiveness of the weights. Furthermore, we show that the proposed method converges to the absolute minimum (zero integration error) when the number of selected points is equal to the number of internal force modes included in the objective function. We illustrate this model reduction methodology by two nonlinear, structural examples (quasi-static bending and resonant vibration of elastoplastic composite plates). In both examples, the number of integration points is reduced three order of magnitudes (with respect to FE analyses) without significantly sacrificing accuracy.
CitationHernandez, J.A., Caicedo, M., Ferrer, A. Dimensional hyper-reduction of nonlinear finite element models via empirical cubature. "Computer methods in applied mechanics and engineering", Gener 2017, vol. 313, p. 687-722.
URIhttp://hdl.handle.net/2117/91502
DOI10.1016/j.cma.2016.10.022
ISSN0045-7825
Publisher versionhttp://www.sciencedirect.com/science/article/pii/S004578251631355X
Collections
Share: