Evaluation of spectrum opportunities in the GSM band 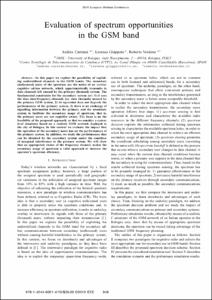 Document typeConference report
Rights accessOpen Access
Abstract
In this paper we explore the possibility of exploiting underutilized channels in the GSM bands. The secondary (unlicensed) users of the spectrum are the nodes of an overlay cognitive ad-hoc network, which opportunistically transmits in data channels left unused by the primary (licensed) system. The fundamental constraints for the secondary system are: 1) it uses the time slots/frequency channels (i.e. data channels) unused by the primary GSM system, 2) its operation does not degrade the performances of the primary system, 3) there is no exchange of signalling information between the primary and the secondary system to facilitate the secondary usage of spectrum, that is, the primary users are not cognitive aware. The focus is on the feasibility of the proposed approach, so that we consider a system level simulator based on a realistic GSM network deployed in the city of Bologna. In this context we evaluate the impact that the operation of the secondary users has on the performances of the primary system. In addition, we study the performances that can be obtained by the secondary system under the condition of marginal interference to the primary system. We will show that an appropriate choice of the frequency channel, makes the secondary usage of spectrum a valid approach to increase the operator's spectrum efficiency.
CitationCarniani, A. [et al.]. Evaluation of spectrum opportunities in the GSM band. A: Newcom-ACoRN Joint Workshop. "Newcom-ACoRN Joint Workshop". Barcelona: 2009.
URIhttp://hdl.handle.net/2117/9133
Publisher versionhttp://ieeexplore.ieee.org/stamp/stamp.jsp?arnumber=05483438
Collections
Share: