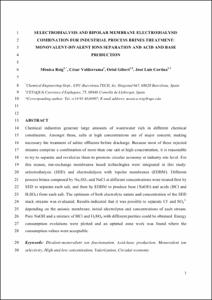 Chemical industries generate large amounts of wastewater rich in different chemical constituents. Amongst these, salts at high concentrations are of major concern, making necessary the treatment of saline effluents before discharge. Because most of these rejected streams comprise a combination of more than one salt at high concentration, it is reasonable to try to separate and revalorize them to promote circular economy at industry site level. For this reason, ion-exchange membranes based technologies were integrated in this study: selectrodialysis (SED) and electrodialysis with bipolar membranes (EDBM). Different process brines composed by Na2SO4 and NaCl at different concentrations were treated first by SED to separate each salt, and then by EDBM to produce base (NaOH) and acids (HCl and H2SO4) from each salt. The optimum of both electrolyte nature and concentration of the SED stack streams was evaluated. Results indicated that it was possible to separate Cl- and SO42- depending on the anionic membrane, initial electrolytes and concentrations of each stream. Pure NaOH and a mixture of HCl and H2SO4 with different purities could be obtained. Energy consumption evolutions were plotted and an optimal zone work was found where the consumption values were acceptable.
CitationReig, M., Valderrama, C., Gibert, O., Cortina, J. Selectrodialysis and bipolar membrane electrodialysis combination for industrial process brines treatment: Monovalent-divalent ions separation and acid and base production. "Desalination", 7 Agost 2016, vol. 399, p. 88-95.
URIhttp://hdl.handle.net/2117/91327
DOI10.1016/j.desal.2016.08.010
ISSN0011-9164
Publisher versionhttp://www.sciencedirect.com/science/article/pii/S0011916416303587