The fragile heart of the city: the case of Ragusa, Sicily 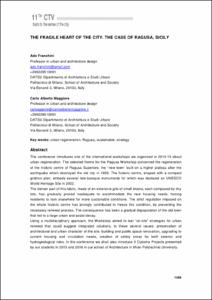 The conference introduces one of the international workshops we organized in 2014-15 about urban regeneration. The selected theme for the Ragusa Workshop concerned the regeneration of the historic centre of Ragusa Superiore, the “new town” built on a higher plateau after the earthquake which destroyed the old city in 1693. The historic centre, shaped with a compact gridiron plan, embeds several late-baroque monuments for which was declared an UNESCO World Heritage Site in 2002. The denser part of this fabric, made of an extensive grid of small blocks, each composed by tiny lots, has gradually proved inadequate to accommodate the new housing needs, forcing residents to look elsewhere for more sustainable conditions. The strict regulation imposed on the whole historic centre has strongly contributed to freeze this condition, by preventing the necessary renewal process. The consequence has been a gradual depopulation of the old town that led to a large urban and social decay. Using a multidisciplinary approach, the Workshop aimed to test “on-site” strategies for urban renewal that could suggest integrated solutions, to these several issues: preservation of architectural and urban character of the site, building and public space renovation, upgrading to current housing and circulation needs, creation of safety areas for both seismic and hydrogeological risks. In the conference we shall also introduce 3 Diploma Projects presented by our students in 2015 and 2016 in our school of Architecture in Milan Polytechnic University.
CitationFranchini, Ado; Maggiore, Carlo Alberto. The fragile heart of the city: the case of Ragusa, Sicily. A: Virtual City and Territory. "Back to the Sense of the City: International Monograph Book". Barcelona: Centre de Política de Sòl i Valoracions, 2016, p. 1388-1401.
URIhttp://hdl.handle.net/2117/91261
ISBN978-84-8157-660-3