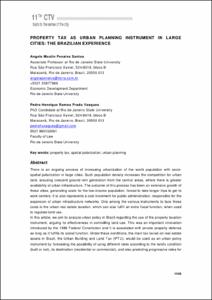 Show full item record
Santos, Angela Moulin Penalva
Vasques, Pedro Henrique Ramos Prado
Document typeConference report
PublisherCentre de Política de Sòl i Valoracions
Rights accessOpen Access
Abstract
There is an ongoing process of increasing urbanization of the world population with socio-spatial polarization in large cities. Such population density increases the competition for urban land, arousing crescent ground rent generation from the central areas, where there is greater availability of urban infrastructure. The outcome of this process has been an extensive growth of these cities, generating costs for the low-income population, forced to take longer trips to get to work centers. It is also represents a cost increment for public administration, responsible for the expansion of urban infrastructure networks. One among the various instruments to face these costs is the urban real estate taxation, which can also fulfill an extra fiscal function, when used to regulate land use. In this article, we aim to analyze urban policy in Brazil regarding the use of the property taxation instrument, arguing its effectiveness in controlling land use. This was an important innovation introduced by the 1988 Federal Constitution and it is associated with private property defense as long as it fulfills its social function. Under these conditions, the main tax levied on real estate assets in Brazil, the Urban Building and Land Tax (IPTU), would be used as an urban policy instrument by foreseeing the possibility of using different rates according to the land's condition (built or not), its destination (residential or commercial), and also predicting progressive rates for properties that do not comply with the social function. Our study takes as reference municipalities with population over 200,000 inhabitants.
CitationSantos, Angela Moulin Penalva; Vasques, Pedro Henrique Ramos Prado. Property tax as urban planning instrument in large cities: the Brazilian experience. A: Virtual City and Territory. "Back to the Sense of the City: International Monograph Book". Barcelona: Centre de Política de Sòl i Valoracions, 2016, p. 1346-1357.
URIhttp://hdl.handle.net/2117/91257
DOI10.5821/ctv.8159
ISBN978-84-8157-660-3
Collections
Share: