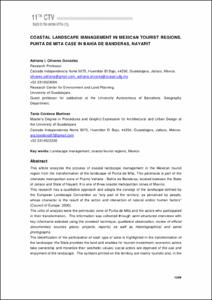 This article analyzes the process of coastal landscape management in the Mexican tourist region from the transformation of the landscape of Punta de Mita. This peninsula is part of the interstate metropolitan zone of Puerto Vallarta - Bahía de Banderas, located between the State of Jalisco and State of Nayarit. It is one of three coastal metropolitan zones of Mexico. This research has a qualitative approach and adopts the concept of the landscape defined by the European Landscape Convention as “any part of the territory, as perceived by people, whose character is the result of the action and interaction of natural and/or human factors” (Council of Europe, 2000). The units of analysis were the peninsular zone of Punta de Mita and the actors who participated in their transformation. The information was collected through semi-structured interviews with key informants selected using the snowball technique, qualitative observation, review of official documentary sources (plans, projects, reports) as well as historiographical and aerial photographs. The identification of the participation of each type of actor is highlighted in the transformation of the landscape: the State provides the land and enables for tourism investment; economic actors take ownership and monetize their aesthetic values; social actors are deprived of the use and enjoyment of the landscape. The symbols printed on the territory are mainly touristic and, in the second instance, natural whose conservation represents a point of agreement between the state and the residents.
CitationOlivares González, Adriana I; Córdova Martínez, Tania. Coastal landscape management in mexican tourist regions: Punta de Mita case in Bahía de Banderas, Nayarit. A: Virtual City and Territory. "Back to the Sense of the City: International Monograph Book". Barcelona: Centre de Política de Sòl i Valoracions, 2016, p. 1299-1312.
URIhttp://hdl.handle.net/2117/91254
ISBN978-84-8157-660-3