The challenge of the last few years: planning against poverty, microfinance 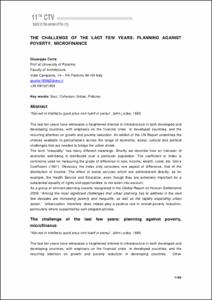 Except where otherwise noted, content on this work is licensed under a Creative Commons license : Attribution-NonCommercial-NoDerivs 3.0 Spain
Abstract
The last ten years have witnessed a heightened interest in infrastructure in both developed and developing countries, with emphasis on the financial crisis in developed countries, and the recurring attention on growth and poverty reduction. An edition of the UN Report underlines the choices available to policymakers across the range of economic, social, cultural and political challenges that are needed to bridge the urban divide. The term “inequality” has many different meanings. Shortly we describe how an indicator of economic well-being is distributed over a particular population. The coefficient or index is commonly used for measuring the grade of difference in size, income, wealth, costs, etc. Gini’s Coefficient (1921). Obviously the index only considers one aspect of difference, that of the distribution of income. The effect of social services which are administered directly, as for example, the Health Service and Education, even though they are extremely important for a substantial equality of rights and opportunities, is not taken into account. As a group of eminent planning experts recognized in the Global Report on Human Settlements 2009: “Among the most significant challenges that urban planning has to address in the next few decades are increasing poverty and inequality, as well as the rapidly expanding urban sector.” Urbanization, therefore, does indeed play a positive role in overall poverty reduction, particularly where supported by well-adapted policies.
CitationCarta, Giuseppe. The challenge of the last few years: planning against poverty, microfinance. A: Virtual City and Territory. "Back to the Sense of the City: International Monograph Book". Barcelona: Centre de Política de Sòl i Valoracions, 2016, p. 1165-1176.
URIhttp://hdl.handle.net/2117/91249
DOI10.5821/ctv.8152
ISBN978-84-8157-660-3
Collections
Share: