Just one housing bubble? an analysys of spatial segmentation of the residencial values over time in Barcelona 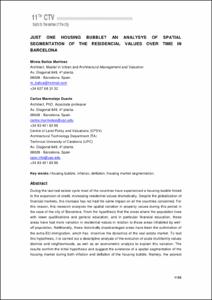 Document typeConference report
PublisherCentre de Política de Sòl i Valoracions
Rights accessOpen Access
Abstract
During the last real estate cycle most of the countries have experienced a housing bubble linked to the expansion of credit, increasing residential values dramatically. Despite the globalization of financial markets, this increase has not had the same impact on all the countries concerned. For this reason, this research analyzes the spatial variation in property values during this period in the case of the city of Barcelona. From the hypothesis that the areas where the population lives with lower qualifications and general education, and in particular financial education, these areas have had more variation in residential values in relation to those areas inhabited by well-off population. Additionally, these historically disadvantaged areas have been the culmination of the extra-EU immigration, which has incentive the dynamics of the real estate market. To test this hypothesis, it is carried out a descriptive analysis of the evolution of scale multifamily values districts and neighborhoods, as well as an econometric analysis to explain this variation. The results confirm the initial hypothesis and suggest the existence of a spatial segmentation of the housing market during both inflation and deflation of the housing bubble. Namely, the poorest neighborhoods have experienced sharped bubbles and busts compared to wealthy areas of the city.
CitationBallús Martínez, Mireia; Marmolejo Duarte, Carlos Ramiro. Just one housing bubble? an analysys of spatial segmentation of the residencial values over time in Barcelona. A: Virtual City and Territory. "Back to the Sense of the City: International Monograph Book". Barcelona: Centre de Política de Sòl i Valoracions, 2016, p. 1153-1164.
URIhttp://hdl.handle.net/2117/91248
DOI10.5821/ctv.8151
ISBN978-84-8157-660-3
Collections
Share: