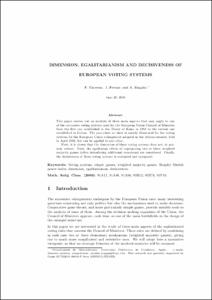 Except where otherwise noted, content on this work is licensed under a Creative Commons license : Attribution-NonCommercial-NoDerivs 3.0 Spain
ProjectASPECTOS MATEMATICOS, COMPUTACIONALES Y SOCIALES EN CONTEXTOS DE VOTACION Y DE COOPERACION. (MINECO-MTM2015-66818-P)
Abstract
An analysis of three major aspects has been carried out that may apply to any of the successive voting systems used for the European Union Council of Ministers, from the first one established in the Treaty of Rome in 1958 to the current one established in Lisbon. We mainly consider the voting systems designed for the enlarged European Union adopted in the Athens summit, held in April 2003 but this analysis can be applied to any other system. First, it is shown that the dimension of these voting systems does not, in general, reduce. Next, the egalitarian effects of superposing two or three weighted majority games (often by introducing additional consensus) are considered. Finally, the decisiveness of these voting systems is evaluated and compared.
Location
1: Justus Lipsius Building, Rue de la Loi 175, 1000 Bruxelles, Bèlgica
CitationCarreras, F., Freixas, J., Magaña, A. Dimension, egalitarianism and decisiveness of European voting systems. "Operations Research and Decisions", 2016, vol. 26, núm. 2, p. 31-52.
URIhttp://hdl.handle.net/2117/91241
DOI10.5277/ord160203
ISSN2081-8858
Collections
Share: