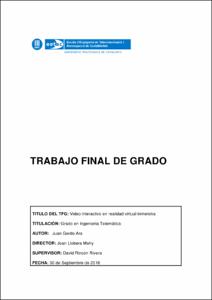 Currently, developers are creating new virtual reality applications related to the field of video games or graphics environments created by computers. This is due largely to the arrival to the consumer market of new technologies to experience these virtual reality environments. This has provoked a wide adoption of 360º videos, which can be viewed directly from smartphones. In addition, cheap adapters allow converting the phone into a virtual reality display. In this project we investigated methods to interact with videos in virtual reality environments. We want to assess what actions are more intuitive for a user. These actions are body-centred, circumventing the use of controls as is customary in the virtual reality and videogames industry. To evaluate these interaction mechanisms, we implemented three test environments. The first allows triggering transitions between omnidirectional videos. The second environment allows interacting with predefined body gestures or voice over traditional videos inserted within the virtual reality environment. The third environment lets the user select the gestures that he wants to associate with the actions defined and applied to the previous videos. Creating an immersive virtual environment with interactive video is a complex undertaking, due to several factors, among which we highlight: lack of recorded omnidirectional video, the difficulty of forcing local video rendering, the balance between image resolution and frames per second that needs to be sought to obtain acceptable experience quality. Finally, we give subjective valuations of the actions in each of the test environments, propose future to enhance the user experience.
SubjectsVirtual reality, Realitat virtual
URIhttp://hdl.handle.net/2117/91234