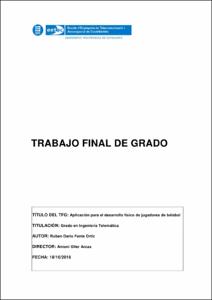 Currently, according to the Consejo Superior de Deportes (CSD) and for the vast majority of people, baseball is a minority sport in Spain. Despite this, Spain is still considered the third best country in Europe, behind Italy and Netherlands. But in the last years it has been suffering stagnation compared to other countries such as Czech Republic, Germany and France, who are increasing their level at an accelerated pace. The growth of the sport is directly proportional to the level of investment in these countries. Given that, the invested capital in Spain is reduced and the resources are scarce, a web and mobile application that helps the physical development of players is proposed. This application enables transparent communication between players and technical staff (coaches and trainers), through a dynamic and personalized training program in the gym, in order to obtain relevant data for the monitoring and development of it. Thanks to that, the coach can make quick and efficiently adjustment to the programs according to the feedback received for each athlete. Telematics interaction through this application allows to set goals in the short, medium and long term, to improve and develop the physical condition of the players. Also it can allow to a minority sport get more efficient and satisfactory results with the same amount of staff.
SubjectsApplication software, Android (Recurs electrònic), Programari d'aplicació
URIhttp://hdl.handle.net/2117/91227