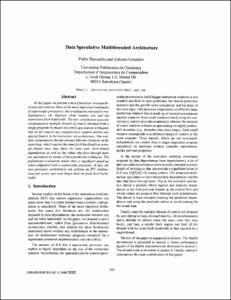 Document typeConference report
PublisherInstitute of Electrical and Electronics Engineers (IEEE)
Rights accessOpen Access
Abstract
We present a novel processor microarchitecture that relieves three of the most important bottlenecks of superscalar processors: the serialization imposed by true dependences, the relatively small window size and the instruction fetch bandwidth. The new architecture executes simultaneously multiple threads of control obtained from a single program by means of control speculation techniques that do not require any compiler/user support nor any special feature in the instruction set architecture. The multiple simultaneous threads execute different iterations of the same loop, which require the same fetch bandwidth as a single thread since they share the same code. Inter-thread dependences as well as the values that flow through them are speculated by means of data prediction techniques. The preliminary evaluation results show a significant speed-up when compared with a superscalar processor. In fact, the new processor architecture can achieve an IPC (instructions per cycle) rate even larger than the peak fetch bandwidth
CitationMarcuello, P., González, A. Data speculative multithreaded architecture. A: EUROMICRO Conference. "24th EUROMICRO Conference: Västeras, Sweden, August 25-27, 1998: proceedings". Västeras: Institute of Electrical and Electronics Engineers (IEEE), 1998, p. 321-324.
URIhttp://hdl.handle.net/2117/91142
DOI10.1109/EURMIC.1998.711819
ISBN0-8186-8646-4
Collections
Share: