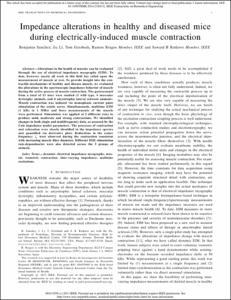 Alterations in the health of muscles can be evaluated through the use of electrical impedance myography (EIM). To date, however, nearly all work in this field has relied upon the measurement of muscle at rest. To provide an insight into the contractile mechanisms of healthy and disease muscle, we evaluated the alterations in the spectroscopic impedance behavior of muscle during the active process of muscle contraction. The gastrocnemii from a total of 13 mice were studied (five wild type, four muscular dystrophy animals, and four amyotrophic lateral sclerosis animals). Muscle contraction was induced via monophasic current pulse stimulation of the sciatic nerve. Simultaneously, multisine EIM (1 kHz to 1 MHz) and force measurements of the muscle were performed. Stimulation was applied at three different rates to produce mild, moderate, and strong contractions. We identified changes in both single and multifrequency data, as assessed by the Cole impedance model parameters. The processes of contraction and relaxation were clearly identified in the impedance spectra and quantified via derivative plots. Reductions in the center frequency f(c) were observed during the contraction consistent with the increasing muscle fiber diameter. Different EIM stimulation rate-dependencies were also detected across the three groups of animals.
CitationSánchez, B., Li, J., Geisbush, T., Bragos, R., Rutkove, S. Impedance alterations in healthy and diseased mice during electrically induced muscle contraction. "IEEE transactions on biomedical engineering", 1 Agost 2016, vol. 63, núm. 8, p. 1602-1612.
URIhttp://hdl.handle.net/2117/91117
DOI10.1109/TBME.2014.2320132
ISSN0018-9294
Publisher versionhttp://ieeexplore.ieee.org/document/6805203/?arnumber=6805203