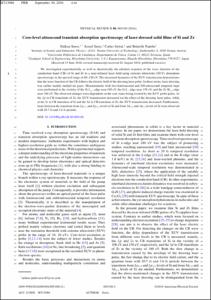 Namba, Shinichi
Document typeArticle
PublisherAmerican Physical Society
Rights accessOpen Access
Abstract
We investigated experimentally as well as theoretically the ultrafast response of the wave function of the conduction band (CB) of Si and Zr to a near-infrared laser field using extreme ultraviolet (XUV) absorption spectroscopy in the spectral range of 80–220 eV. The measured dynamics of the XUV transmission demonstrates that the wave function of the CB follows the electric field of the dressing laser pulse. In these terms, laser dressing was earlier mainly studied on gases. Measurements with two-femtosecond and 200-attosecond temporal steps were performed in the vicinity of the SiL2,3 edge near 100 eV, the SiL1 edge near 150 eV, and the ZrM4,5 edge near 180 eV. The observed changes were dependent on the core states being excited by the XUV probe pulse. At the 2p to CB transitions of Si, the XUV transmission increased via the effect of the dressing laser pulse, while at the 2s to CB transition of Si and the 3d to CB transition of Zr, the XUV transmission decreased. Furthermore, beats between the transition from 2p1/2 and 2p3/2 levels of Si and from 3d3/2 and 3d5/2 levels of Zr were observed with 20.7 fs and 3.6 fs periods.
CitationSeres, E., Seres, J., Serrat, C., Namba, S. Core-level attosecond transient absorption spectroscopy of laser-dressed solid films of Si and Zr. "Physical review B", 12 Octubre 2016, vol. 94, núm. 16, p. 165125-1-165125-11.
URIhttp://hdl.handle.net/2117/91112
DOI10.1103/PhysRevB.94.165125
ISSN2469-9969
Publisher versionhttp://journals.aps.org/prb/abstract/10.1103/PhysRevB.94.165125
Collections
Share: