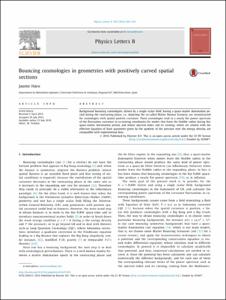 Document typeArticle
PublisherElsevier
Rights accessOpen Access
Abstract
Background bouncing cosmologies, driven by a single scalar field, having a quasi-matter domination period during the contracting phase, i.e., depicting the so-called Matter Bounce Scenario, are reconstructed for cosmologies with spatial positive curvature. These cosmologies lead to a nearly flat power spectrum of the fluctuation curvature in co-moving coordinates for modes that leave the Hubble radius during this quasi-matter domination period, and whose spectral index and its running, which are related with the effective Equation of State parameter given by the quotient of the pressure over the energy density, are compatible with experimental data
CitationHaro, J. Bouncing cosmologies in geometries with positively curved spatial sections. "Physics letters B", 10 Setembre 2016, vol. 760, p. 605-610.
URIhttp://hdl.handle.net/2117/91084
DOI10.1016/j.physletb.2016.07.053
ISSN0370-2693
Publisher versionhttp://www.sciencedirect.com/science/article/pii/S037026931630394X
Collections
Share: