Near-surface and columnar measurements with a micro pulse lidar of atmospheric pollen in Barcelona, Spain 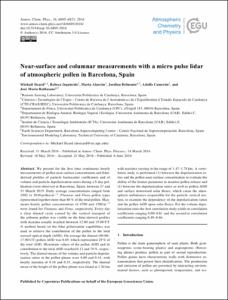 We present for the first time continuous hourly measurements of pollen near-surface concentration and lidar-derived profiles of particle backscatter coefficients and of volume and particle depolarization ratios during a 5-day pollination event observed in Barcelona, Spain, between 27 and 31 March 2015. Daily average concentrations ranged from 1082 to 2830aEuro-pollenaEuro-m(-3). Platanus and Pinus pollen types represented together more than 80aEuro-% of the total pollen. Maximum hourly pollen concentrations of 4700 and 1200aEuro-m(-3) were found for Platanus and Pinus, respectively. Every day a clear diurnal cycle caused by the vertical transport of the airborne pollen was visible on the lidar-derived profiles with maxima usually reached between 12:00 and 15:00aEuro-UT. A method based on the lidar polarization capabilities was used to retrieve the contribution of the pollen to the total aerosol optical depth (AOD). On average the diurnal (09:00-17:00aEuro-UT) pollen AOD was 0.05, which represented 29aEuro-% of the total AOD. Maximum values of the pollen AOD and its contribution to the total AOD reached 0.12 and 78aEuro-%, respectively. The diurnal means of the volume and particle depolarization ratios in the pollen plume were 0.08 and 0.14, with hourly maxima of 0.18 and 0.33, respectively. The diurnal mean of the height of the pollen plume was found at 1.24aEuro-km with maxima varying in the range of 1.47-1.78aEuro-km. A correlation study is performed (1) between the depolarization ratios and the pollen near-surface concentration to evaluate the ability of the former parameter to monitor pollen release and (2) between the depolarization ratios as well as pollen AOD and surface downward solar fluxes, which cause the atmospheric turbulences responsible for the particle vertical motion, to examine the dependency of the depolarization ratios and the pollen AOD upon solar fluxes. For the volume depolarization ratio the first correlation study yields to correlation coefficients ranging 0.00-0.81 and the second to correlation coefficients ranging 0.49-0.86.
CitationSicard, M., Izquierdo, R., Alarcon, M., Belmonte, J., Comeron, A., Baldasano, J. Near-surface and columnar measurements with a micro pulse lidar of atmospheric pollen in Barcelona, Spain. "Atmospheric chemistry and physics", 1 Gener 2016, vol. 16, núm. 11, p. 6805-6821.
URIhttp://hdl.handle.net/2117/91078
DOI10.5194/acp-16-6805-2016
ISSN1680-7324
Publisher versionhttp://www.atmos-chem-phys.net/16/6805/2016/