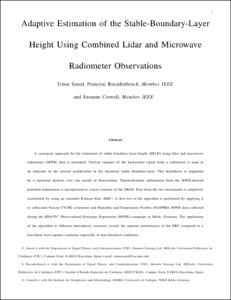 Crewell, Susanne
Document typeArticle
PublisherInstitute of Electrical and Electronics Engineers (IEEE)
Rights accessOpen Access
All rights reserved. This work is protected by the corresponding intellectual and industrial property rights. Without prejudice to any existing legal exemptions, reproduction, distribution, public communication or transformation of this work are prohibited without permission of the copyright holder
Abstract
A synergetic approach for the estimation of stable boundary-layer height (SBLH) using lidar and microwave radiometer (MWR) data is presented. Vertical variance of the backscatter signal from a ceilometer is used as an indicator of the aerosol stratification in the nocturnal stable boundary-layer. This hypothesis is supported by a statistical analysis over one month of observations. Thermodynamic information from the MWR-derived potential temperature is incorporated as coarse estimate of the SBLH. Data from the two instruments is adaptively assimilated by using an extended Kalman filter (EKF). A first test of the algorithm is performed by applying it to collocated Vaisala CT25K ceilometer and Humidity-and-Temperature Profiler (HATPRO) MWR data collected during the HD(CP)2 Observational Prototype Experiment (HOPE) campaign at Julich, Germany. The application of the algorithm to different atmospheric scenarios reveals the superior performance of the EKF compared to a non-linear least-squares estimator especially in non-idealized conditions.
CitationSaeed, U., Rocadenbosch, F., Crewell, S. Adaptive estimation of the stable boundary layer height using combined lidar and microwave radiometer observations. "IEEE transactions on geoscience and remote sensing", 2016, vol. 54, núm. 12, p. 6895-6906.
URIhttp://hdl.handle.net/2117/91075
DOI10.1109/TGRS.2016.2586298
ISSN0196-2892
Publisher versionhttp://ieeexplore.ieee.org/document/7568984/
Collections
Share: