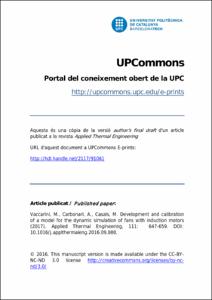 Document typeArticle
Rights accessOpen Access
Abstract
In this paper a model for the dynamic simulation of fans used in mechanical air supply systems is described. Thanks to this model, the behavior of fans subject to control by variable frequency drives (VFD) can be predicted, which includes power absorbed by the fan and expected ventilation rates. Hence, it can help design energy control systems for buildings. The proposed model was based on the Modelica language and was developed from the dynamic phasor domain representation, because this representation is a trade-off between the basic non transient representation, that is computationally efficient but cannot describe fan dynamics, and the dynamic time domain model, that is the most representative one but computationally very demanding. A comparison among these models showed that, within fan frequency variations typical of ventilation systems in buildings, the phasor domain model is as representative as the more complex dynamic time domain model in terms of prediction of the dynamic behavior, that is neglected by the basic non transient model. Moreover, the new phasor domain model was validated against measured data relative to a fan installed in a subway station in Barcelona. Thanks to this model, energy consumption of dynamically driven fans can be estimated at the simulation stage, at the expense of a reasonable computational effort.
CitationVaccarini, M., Carbonari, A., Casals, M. Development and calibration of a model for the dynamic simulation of fans with induction motors. "Applied thermal engineering", 25 Gener 2017, vol. 111, p. 647-659.
URIhttp://hdl.handle.net/2117/91061
DOI10.1016/j.applthermaleng.2016.09.080
ISSN1359-4311
Publisher versionhttp://www.sciencedirect.com/science/article/pii/S135943111631688X
Collections
Share: