An algebraic framework for Diffie–Hellman assumptions 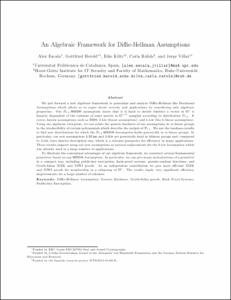 Document typeArticle
Rights accessOpen Access
Abstract
We put forward a new algebraic framework to generalize and analyze Diffie-Hellman like Decisional Assumptions which allows us to argue about security and applications by considering only algebraic properties. Our D`,k-MDDH assumption states that it is hard to decide whether a vector in ¿ìs linearly dependent of the columns of some matrix in ¿`×k sampled according to distribution D`,k. It covers known assumptions such as DDH, 2-Lin (linear assumption), and k-Lin (the k-linear assumption). Using our algebraic viewpoint, we can relate the generic hardness of our assumptions in m-linear groups to the irreducibility of certain polynomials which describe the output of D`,k. We use the hardness results to find new distributions for which the D`,k-MDDH-Assumption holds generically in m-linear groups. In particular, our new assumptions 2-SCasc and 2-ILin are generically hard in bilinear groups and, compared to 2-Lin, have shorter description size, which is a relevant parameter for efficiency in many applications. These results support using our new assumptions as natural replacements for the 2-Lin Assumption which was already used in a large number of applications. To illustrate the conceptual advantages of our algebraic framework, we construct several fundamental primitives based on any MDDH-Assumption. In particular, we can give many instantiations of a primitive in a compact way, including public-key encryption, hash-proof systems, pseudo-random functions, and Groth-Sahai NIZK and NIWI proofs. As an independent contribution we give more efficient NIZK and NIWI proofs for membership in a subgroup of ¿` . The results imply very significant efficiency improvements for a large number of schemes.
CitationEscala, A., Herold, G., Kiltz, E., Rafols, C., Villar, J. An algebraic framework for Diffie–Hellman assumptions. "Journal of cryptology", 2017, vol. 30, núm. 1, p. 242-288.
URIhttp://hdl.handle.net/2117/91050
DOI10.1007/s00145-015-9220-6
ISSN0933-2790
Publisher versionhttp://link.springer.com/article/10.1007%2Fs00145-015-9220-6
Collections
Share: