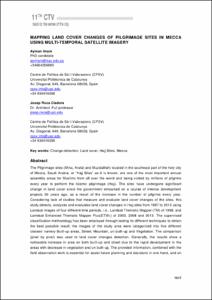 Llevat que s'hi indiqui el contrari, els continguts d'aquesta obra estan subjectes a la llicència de Creative Commons : Reconeixement-NoComercial-SenseObraDerivada 3.0 Espanya
Abstract
The Pilgrimage sites (Mina, Arafat and Muzdalifah) located in the southeast part of the holy city of Mecca, Saudi Arabia, or “Hajj Sites” as it is known, are one of the most important annual assembly areas for Muslims from all over the world and being visited by millions of pilgrims every year to perform the Islamic pilgrimage (Hajj). The sites have undergone significant change in land cover since the government embarked on a course of intense development projects 20 years ago, as a result of the increase in the number of pilgrims every year. Considering lack of studies that measure and evaluate land cover changes of the sites, this study detects, analyzes and evaluates land cover changes in Hajj sites from 1997 to 2013 using Landsat images of four different time periods, i.e., Landsat Thematic Mapper (TM) of 1998, and Lamdsat Enhanced Thematic Mapper Plus(ETM+) of 2003, 2008 and 2013. The supervised classification methodology has been employed through testing its different techniques to obtain the best possible result; the images of the study area were categorized into five different classes’ namely Built-up areas, Street, Mountain, un built-up and Vegetation. The comparison (pixel by pixel) was used to land cover changes detection. Generally, the results show a noticeable increase in area on both built-up and street due to the rapid development in the areas with decrease in vegetation and un built-up. The provided information, combined with the field observation work is essential for assist future planning and decisions in one hand, and on the other hand can play an important role in quantifying and understanding the relationship between population growth (pilgrims) and land cover changes.
CitacióImam, Ayman; Roca Cladera, Josep. Mapping land cover changes of pilgrimage sites in Mecca using multi-temporal satellite imagery. A: Virtual City and Territory. "Back to the Sense of the City: International Monograph Book". Barcelona: Centre de Política de Sòl i Valoracions, 2016, p. 1017-1027.
URIhttp://hdl.handle.net/2117/91036
DOI10.5821/ctv.8140
ISBN978-84-8157-660-3
Col·leccions
Comparteix: