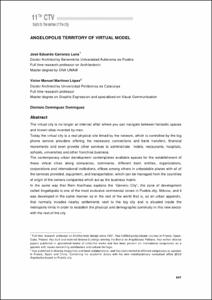 The virtual city is no longer an internet affair where you can navigate between fantastic spaces and known sites invented by man. Today the virtual city is a real physical site linked by the network, which is controlled by the big phone service providers offering the necessary connections and bank transfers, financial movements and even provide other services to administrate hotels, restaurants, hospitals, schools, universities and other franchise business The contemporary urban development contemplates available spaces for the establishment of these virtual cities along companies, commerce, different bank entities, organizations, corporations and international institutions, offices among others in unbeatable places with all of the services provided, equipment, and transportation, which can be managed from the countries of origin of the owners companies which act as the business matrix. In the same way that Rem Koolhaas explains the “Generic City”, the zone of development called Angelópolis is one of the most exclusive commercial zones in Puebla city, México, and it was developed in the same manner as in the rest of the world that is, as an urban appendix, that normally invades nearby settlements next to the big city and is situated inside the metropolis limits in order to establish the physical and demographic continuity in this new sector with the rest of the city. These new urban districts developments are very much alike as others in the world, so the present paper explains the important characteristics of the Angelópolis zone and the relation with the exterior and virtual connections that are being now generalized among the planet.
CitationCarranza Luna, José Eduardo; Martínez López, Víctor Manuel. Angelópolis territory of virtual model. A: Virtual City and Territory. "Back to the Sense of the City: International Monograph Book". Barcelona: Centre de Política de Sòl i Valoracions, 2016, p. 947-964.
URIhttp://hdl.handle.net/2117/91028
ISBN978-84-8157-660-3