Patterns of non-planned occupation of the peri-urban territory of the Huerta de Murcia, 1929-2015 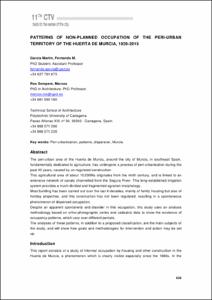 The peri-urban area of the Huerta de Murcia, around the city of Murcia, in southeast Spain, fundamentally dedicated to agriculture, has undergone a process of peri-urbanisation during the past 40 years, caused by un-regulated construction. This agricultural area of about 10,000Ha originates from the ninth century, and is linked to an extensive network of canals channelled from the Segura River. This long-established irrigation system provides a much divided and fragmented agrarian morphology. Most building has been carried out over the last 4 decades, mainly of family housing but also of holiday properties, and this construction has not been regulated, resulting in a spontaneous phenomenon of dispersed occupation. Despite an apparent spontaneity and disorder in this occupation, this study uses an analysis methodology based on ortho-photographic series and cadastral data to show the existence of occupancy patterns, which vary over different periods. The analyses of these patterns, in addition to a proposed classification, are the main subjects of the study, and will show how goals and methodologies for intervention and action may be set up.
CitationGarcía Martín, Fernando M; Ros Sempere, Marcos. Patterns of non-planned occupation of the peri-urban territory of the Huerta de Murcia, 1929-2015. A: Virtual City and Territory. "Back to the Sense of the City: International Monograph Book". Barcelona: Centre de Política de Sòl i Valoracions, 2016, p. 826-837.
URIhttp://hdl.handle.net/2117/91017
ISBN978-84-8157-660-3