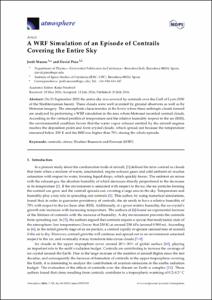 Except where otherwise noted, content on this work is licensed under a Creative Commons license : Attribution-NonCommercial-NoDerivs 3.0 Spain
Abstract
On 21 September 2012 the entire sky was covered by contrails over the Gulf of Lyon (NW of the Mediterranean basin). These clouds were well recorded by ground observers as well as by Meteosat imagery. The atmospheric characteristics at the levels where these anthropic clouds formed are analyzed by performing a WRF simulation in the area where Meteosat recorded contrail clouds. According to the vertical profiles of temperature and the relative humidity respect to the ice (RHI), the environmental condition favors that the water vapor exhaust emitted by the aircraft engines reaches the deposition point and form crystal clouds, which spread out because the temperature remained below 230 K and the RHI was higher than 70% during the whole episode.
Location
1: Villette Gare, 69003 Lyon, França
CitationMazon, J., Pino, D. A WRF simulation of an episode of contrails covering the entire sky. "Atmosphere", 20 Juliol 2016.
URIhttp://hdl.handle.net/2117/91007
DOI10.3390/atmos7070095
ISSN2073-4433
Publisher versionhttp://www.mdpi.com/journal/atmosphere
Collections
Share: