Water supplies build the cities: the Canal de Isabel II as origin of the Metropolis of Madrid 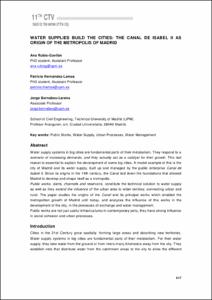 Show full item record
Rubio-Gavilán, Ana
Hernández-Lamas, Patricia
Bernabeu-Larena, Jorge
Document typeConference report
PublisherCentre de Política de Sòl i Valoracions
Rights accessOpen Access
Abstract
Water supply systems in big cities are fundamental parts of their metabolism. They respond to a scenario of increasing demands, and they actually act as a catalyst for their growth. This last reason is essential to explain the development of some big cities. A model example of this is the city of Madrid and its water supply, built up and managed by the public enterprise Canal de Isabel II. Since its origins in the 19th century, the Canal laid down the foundations that allowed Madrid to develop and shape itself as a metropolis. Public works, dams, channels and reservoirs, constitute the technical solution to water supply as well as they extend the influence of the urban area to wider territory, connecting urban and rural. The paper studies the origins of the Canal and its principal works which enabled the metropolitan growth of Madrid until today, and analyzes the influence of this works in the development of the city, in the processes of exchange and water management. Public works are not just useful infrastructures in contemporary polis, they have strong influence in social cohesion and urban processes.
CitationRubio-Gavilán, Ana; Hernández-Lamas, Patricia; Bernabeu-Larena, Jorge. Water supplies build the cities: the Canal de Isabel II as origin of the Metropolis of Madrid. A: Virtual City and Territory. "Back to the Sense of the City: International Monograph Book". Barcelona: Centre de Política de Sòl i Valoracions, 2016, p. 617-627.
URIhttp://hdl.handle.net/2117/91002
DOI10.5821/ctv.8127
ISBN978-84-8157-660-3
Collections
Share: