The citizenship territories program and the challenges for the rural exodus combat in north plateau catarinense: a case study in municipalities of São Bento do Sul and Rio Negrinho 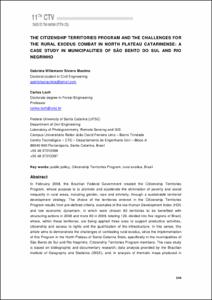 Show full item record
Maximo, Gabriela Willemann Siviero
Loch, Carlos
Document typeConference report
PublisherCentre de Política de Sòl i Valoracions
Rights accessOpen Access
Abstract
In February 2008, the Brazilian Federal Government created the Citizenship Territories Program, whose purpose is to promote and accelerate the elimination of poverty and social inequality in rural areas, including gender, race and ethnicity, through a sustainable territorial development strategy. The choice of the territories entered in the Citizenship Territories Program results from pre-defined criteria, examples of the low Human Development Index (HDI) and low economic dynamism, in which were chosen 60 territories to be benefited with structuring actions in 2008 and more 60 in 2009, totaling 120, divided into five regions of Brazil, where, within these territories, are being applied three axes to support productive activities, citizenship and access to rights and the qualification of the infrastructure. In this sense, this article aims to demonstrate the challenges of combating rural exodus, since the implementation of this Program in the North Plateau of Santa Catarina State, specifically in the municipalities of São Bento do Sul and Rio Negrinho, Citizenship Territories Program members. The case study is based on bibliographic and documentary research; data analysis provided by the Brazilian Institute of Geography and Statistics (IBGE), and; in analysis of thematic maps produced in environment of Geographic Information Systems (GIS). With the found results expected to ratify that despite the efforts and actions taken by the Citizenship Territories Program, in these members municipalities, public policy has not been able to be effective in combating rural exodus, where it is believed that the appeal to such an act are still insufficient.
CitationMaximo, Gabriela Willemann Siviero; Loch, Carlos. The citizenship territories program and the challenges for the rural exodus combat in north plateau catarinense: a case study in municipalities of São Bento do Sul and Rio Negrinho. A: Virtual City and Territory. "Back to the Sense of the City: International Monograph Book". Barcelona: Centre de Política de Sòl i Valoracions, 2016, p. 544-555.
URIhttp://hdl.handle.net/2117/90996
DOI10.5821/ctv.8124
ISBN978-84-8157-660-3
Collections
Share: