Clustering the Roman Empire: the use of multivariable analysis to understand cultural dynamics 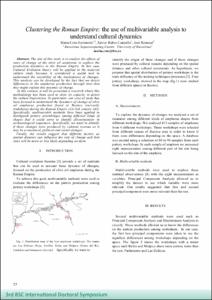 The aim of this study is to analyze the effects of rates of change of the olive oil amphorae to explore the production dynamics in the Roman Empire. In this case Cultural Evolution theory will be applied to the material culture study because is considered a useful tool to understand the variability of the mechanisms of changes. This analysis can be developed by the fact that we detect differences in the amphorae production through time that they might explain this dynamic of change. In this context, it will be presented a research where this methodology has been used to show its capacity to detect the culture trajectories. In particular, our case of study has been focused to understand the dynamics of change of olive oil amphorae production found in Baetica (currently Andalusia) during the Roman Empire (1st-3rd century AD). Specifically, multivariable methods have been applied to distinguish pottery assemblages among different kinds of shapes that it could serve to identify discontinuities in archaeological sequences. Specifically, we want to identify if these changes were produced by cultural reasons as it may be economical, political and social changes. Finally, the results suggest that different factors as spatial distance can influence the rate of change and that rates will be more or less likely depending on them.
CitationCoto-Sarmiento, Maria; Rubio-Campillo, Xavier; Remesal, José. Clustering the Roman Empire: the use of multivariable analysis to understand cultural dynamics. A: 3rd BSC International Doctoral Symposium. "Book of abstracts". Barcelona: Barcelona Supercomputing Center, 2015, p. 77-78.
URIhttp://hdl.handle.net/2117/90988