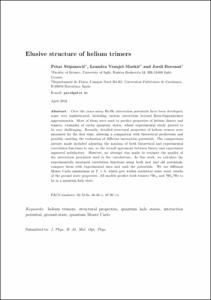 Document typeArticle
Rights accessOpen Access
Abstract
Over the years many He–He interaction potentials have been developed, some very sophisticated, including various corrections beyond the Born–Oppenheimer approximation. Most of them were used to predict properties of helium dimers and trimers, examples of exotic quantum states, whose experimental study proved to be very challenging. Recently, detailed structural properties of helium trimers were measured for the first time, allowing a comparison with theoretical predictions and possibly enabling the evaluation of different interaction potentials. The comparisons already made included adjusting the maxima of both theoretical and experimental correlation functions to one, so the overall agreement between theory and experiment appeared satisfactory. However, no attempt was made to evaluate the quality of the interaction potentials used in the calculations. In this work, we calculate the experimentally measured correlation functions using both new and old potentials, compare them with experimental data and rank the potentials. We use diffusion Monte Carlo simulations at T = 0, which give within statistical noise exact results of the ground state properties. All models predict both trimers 4He3 and 4He${}_{2}{}^{3}$He to be in a quantum halo state.
CitationStipanovic, P., Leandra, V., Boronat, J. Elusive structure of helium trimers. "Journal of Physics B: Atomic, Molecular and Optical Physics", 23 Agost 2016, vol. 49, núm. 18.
URIhttp://hdl.handle.net/2117/90935
DOI10.1088/0953-4075/49/18/185101
ISSN1361-6455
Publisher versionhttp://iopscience.iop.org/article/10.1088/0953-4075/49/18/185101/meta;jsessionid=65DB45D28CD39D02A5DAC71CA70ED703.c4.iopscience.cld.iop.org
Collections
Share: