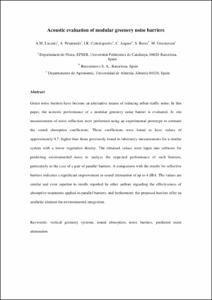 Bures, S.
Urrestarazu, M.
Document typeArticle
Rights accessOpen Access
Abstract
Green noise barriers have become an alternative means of reducing urban traffic noise. In this paper, the acoustic performance of a modular greenery noise barrier is evaluated. In situ measurements of noise reflection were performed using an experimental prototype to estimate the sound absorption coefficients. These coefficients were found to have values of approximately 0.7, higher than those previously found in laboratory measurements for a similar system with a lower vegetation density. The obtained values were input into software for predicting environmental noise to analyse the expected performance of such barriers, particularly in the case of a pair of parallel barriers. A comparison with the results for reflective barriers indicates a significant improvement in sound attenuation of up to 4 dBA. The values are similar and even superior to results reported by other authors regarding the effectiveness of absorptive treatments applied to parallel barriers, and furthermore, the proposed barriers offer an aesthetic element for environmental integration.
CitationLacasta, A.M, Peñaranda, A., Rodriguez Cantalapiedra, I., Auguet, C., Bures, S., Urrestarazu, M. Acoustic evaluation of modular greenery noise barriers. "Urban forestry & urban greening", 1 Desembre 2016, vol. 20, núm. December, p. 172-179.
URIhttp://hdl.handle.net/2117/90870
DOI10.1016/j.ufug.2016.08.010
ISSN1610-8167
Collections
Share: