The unravelling of the complex pattern of tyrosinase inhibition 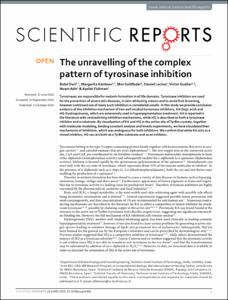 Tyrosinases are responsible for melanin formation in all life domains. Tyrosinase inhibitors are used for the prevention of severe skin diseases, in skin-whitening creams and to avoid fruit browning, however continued use of many such inhibitors is considered unsafe. In this study we provide conclusive evidence of the inhibition mechanism of two well studied tyrosinase inhibitors, KA (kojic acid) and HQ (hydroquinone), which are extensively used in hyperpigmentation treatment. KA is reported in the literature with contradicting inhibition mechanisms, while HQ is described as both a tyrosinase inhibitor and a substrate. By visualization of KA and HQ in the active site of TyrBm crystals, together with molecular modeling, binding constant analysis and kinetic experiments, we have elucidated their mechanisms of inhibition, which was ambiguous for both inhibitors. We confirm that while KA acts as a mixed inhibitor, HQ can act both as a TyrBm substrate and as an inhibitor.
CitationDeri, Batel [et al.]. The unravelling of the complex pattern of tyrosinase inhibition. "Scientific Reports", 11 Octubre 2016, vol. 6, núm. 34993.
URIhttp://hdl.handle.net/2117/90867
DOI10.1038/srep34993
ISSN2045-2322
Publisher versionhttp://www.nature.com/articles/srep34993