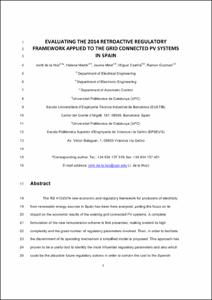 Document typeArticle
Rights accessOpen Access
Abstract
© 2016 Elsevier Ltd. The RD 413/2014 new economic and regulatory framework for producers of electricity from renewable energy sources in Spain has been here analysed, putting the focus on its impact on the economic results of the existing grid connected PV systems. A complete formulation of the new remuneration scheme is first presented, making evident its high complexity and the great number of regulatory parameters involved. Then, in order to facilitate the discernment of its operating mechanism a simplified model is proposed. This approach has proven to be a useful tool to identify the most influential regulatory parameters and also which could be the plausible future regulatory actions in order to contain the cost to the Spanish Electricity System. Finally, the NPV and the IRR among other indicators are calculated for a representative case study facility, evidencing a substantial profitability reduction in the transition from the former economic and regulatory framework to the RD 413/2014 new remuneration scheme.
CitationDe La Hoz, J., Martin, M., Miret, J., Castilla, M., Guzman, R. Evaluating the 2014 retroactive regulatory framework applied to the grid connected PV systems in Spain. "Applied energy", 15 Maig 2016, vol. 170, p. 329.
URIhttp://hdl.handle.net/2117/90837
DOI10.1016/j.apenergy.2016.02.092
ISSN0306-2619
Publisher versionhttp://www.sciencedirect.com/science/article/pii/S0306261916302483
Collections
Share: