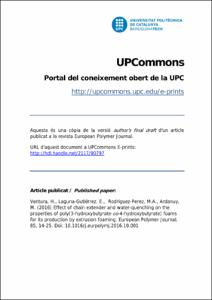 Ventura, Heura. Effect of chain extender and water-quenching on the properties of poly3 ,,,.pdf (861,1Kb)
Share:

Except where otherwise noted, content on this work is licensed under a Creative Commons license : Attribution-NonCommercial-NoDerivs 3.0 Spain
Abstract
Bacterial polyesters such as polyhydroxyalkanoates (PHAs) are of great interest for a large number of applications both because of their properties and because they come from renewable resources, despite having a higher cost than commodity polymers. Their foaming—although it presents some difficulties—could be an option to increase their competitiveness. In this work, two strategies have been studied to enhance the poly(3-hydoxybutyrate-co-4-hydroxybutyrate) (P3HB4HB) foamability by extrusion foaming. The effect of the cooling system (water-quenching or air-cooling), chain extender (CE) addition and chemical blowing agent (CBA) amount were evaluated. Density, cellular morphology, mechanical and thermal properties were studied. Optimal density reduction was achieved with use of CE and 3–4 wt.% of CBA masterbatch. The most effective strategy on density reduction was the addition of CE, while the water quenching had only a slight influence on the samples in which CE was not present. CE addition decreased the viscosity and the degradation rate of the polymer, thus leading to lighter foams with larger cells but with equal or even slightly better resistance to compressive and tensile stress, in general terms
CitationVentura, H., Laguna-Gutiérrez, E., Rodríguez-Pérez , M., Ardanuy, M. Effect of chain extender and water-quenching on the properties of poly(3-hydroxybutyrate-co-4-hydroxybutyrate) foams for its production by extrusion foaming. "European polymer journal", 1 Octubre 2016, vol. 85, p. 14-25.
URIhttp://hdl.handle.net/2117/90797
DOI10.1016/j.eurpolymj.2016.10.001
ISSN0014-3057
Publisher versionhttp://www.sciencedirect.com/science/article/pii/S0014305716303743
Collections
Share: