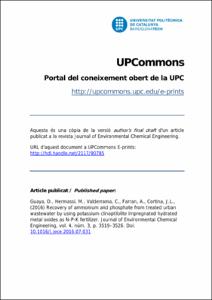 Document typeArticle
Rights accessOpen Access
Abstract
A natural clinoptilolite in its potassium form (KNC) was modified by impregnation of hydrated metal oxides (HMO) of aluminium (III) (KAlC), iron (III) (KFeC) and manganese (IV) (KMnC) for the simultaneous ammonium and phosphate recovery from urban wastewaters. The resulting pHpzc of the HMOs on the modified zeolites (7.3 ± 0.3 for KAlC, 6.4 ± 0.4 for KFeC and 6.9 ± 0.3 for KMnC) are suitable for phosphate sorption at pH of treated urban wastewaters (6–8). The sorption capacity for phosphate for KAlC and KFeC zeolites is higher at the lower pH range while for KMnC is higher at the upper pH range. Differences were associated to the intrinsic complexing properties of the MOH groups to form outer and inner sphere MOH-phosphate complexes. The maximum phosphate sorption capacity for the three zeolites were 6.8 mg-P/g for KAlC, 7.2 mg-P/g for KFeC and 8.2 mg-P/g for KMnC. Contrary maximum ammonium sorption capacity is kept constant between pH 4–9 for the tree zeolites as the main sorption mechanism is the ion-exchange reaction with K+ ions of the zeolite. The maximum ammonium sorption capacity for the three zeolites ranged from 29 to 33 mg-N/g. These differences on the nature of the sorption processes are also reflected in a much faster sorption kinetic for ammonium than for phosphate although for both species the rate determining step was ions diffusion on the zeolite particles. Modified zeolites shown high selectivity towards ammonium and phosphate in the presence of the dissolved organic matter as well as other ionic species present in the treated wastewaters. Finally, phosphorous (P) fractionation assays of the loaded zeolites confirmed a high phosphate bioavailability if these are applied as phosphate slow release fertilizers in soil applications
CitationGuaya, D., Hermassi, M., Valderrama, C., Farran, A., Cortina, J. Recovery of ammonium and phosphate from treated urban wastewater by using potassium clinoptilolite impregnated hydrated metal oxides as N-P-K fertilizer. "Journal of Environmental Chemical Engineering", 1 Setembre 2016, vol. 4, núm. 3, p. 3519-3526.
URIhttp://hdl.handle.net/2117/90785
DOI10.1016/j.jece.2016.07.031
ISSN2213-3437
Publisher versionhttp://www.sciencedirect.com/science/article/pii/S2213343716302810
Collections
Share: