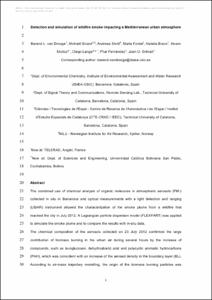 Except where otherwise noted, content on this work is licensed under a Creative Commons license : Attribution-NonCommercial-NoDerivs 3.0 Spain
ProjectACTRIS-2 - Aerosols, Clouds, and Trace gases Research InfraStructure (EC-H2020-654109)
Abstract
The combined use of chemical analysis of organic molecules in atmospheric aerosols (PM1) collected in situ in Barcelona and optical measurements with a light detection and ranging (LIDAR) instrument allowed the characterization of the smoke plume from a wildfire that reached the city in July 2012. Analysis of the chemical composition of the aerosols collected on 23 July 2012 confirmed the large effect of biomass burning on urban air quality during a period of several hours. Typical biomass burning tracers, such as levoglucosan, dehydroabietic acid and polycyclic aromatic hydrocarbons (PAH) were enhanced at the same time as the aerosol concentrations in the boundary layer increased. According to air-mass trajectory modeling, the biomass burning particles originated from a severe wildfire burning 120 km northeast of the city. On the following days, no significant contribution of wildfire smoke was found in the urban air, although the lidar detected particles aloft. A Lagrangian particle dispersion model (FLEXPART) was used to simulate the transport of aerosols (PM2.5) and carbon monoxide (CO), and the simulated concentrations in Barcelona were compared to in-situ measurements. FLEXPART simulated the onset of the wildfire smoke plume event in the urban center in the early morning of 23 July successfully; by contrast, the fast passage of the plume at the surface and the decoupling of the cleaner boundary layer from the persistent smoke plume aloft was not well captured. This was attributed to the fact that the model did not capture the local sea-breeze circulation well enough.
Citationvan Drooge, B., Sicard, M., Stohl, A., Fontal, M., Bravo, N., Muñoz, A., Lange, D., Fernández, P., Obrador, J. Detection and simulation of wildfire smoke impacting a Mediterranean urban atmosphere. "Atmospheric Pollution Research", Maig 2016, vol. 7, núm. 3, p. 494-502.
URIhttp://hdl.handle.net/2117/90769
DOI10.1016/j.apr.2015.12.003
ISSN1309-1042
Publisher versionhttp://www.sciencedirect.com/science/article/pii/S1309104215300155
Collections
Share: