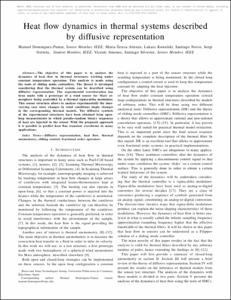 Document typeArticle
PublisherInstitute of Electrical and Electronics Engineers (IEEE)
Rights accessOpen Access
Abstract
The objective of this paper is to analyze the dynamics of heat flow in thermal structures working under constant temperature operation. This analysis is made using the tools of sliding mode controllers. The theory is developed considering that the thermal system can be described using diffusive representation. The experimental corroboration has been made with a prototype of a wind sensor for Mars atmosphere being controlled by a thermal sigma-delta modulator. This sensor structure allows to analyze experimentally the time-varying case since changes in wind conditions imply changes in the corresponding thermal models. The diffusive symbols of the experimental structures have been obtained from openloop measurements in which pseudo-random binary sequences of heat are injected in the sensor. With the proposed approach it is possible to predict heat flux transient waveforms in systems described by any arbitrary number of poles. This allows for the first time the analysis of lumped and distributed systems without any limitation on the number of poles describing it.
CitationDominguez, M., Atienza, M., Kowalski, L., Novio, S., Gorreta, S., Jimenez, V., Silvestre, S. Heat flow dynamics in thermal systems described by diffusive representation. "IEEE transactions on industrial electronics", Vol.64 (1) January 2017
URIhttp://hdl.handle.net/2117/90754
DOI10.1109/TIE.2016.2605621
ISSN0278-0046
Publisher versionhttp://ieeexplore.ieee.org/document/7558240/
Collections
Share: