Melt fracturing and healing: a mechanism for rhyolite magma degassing and origin of obsidian 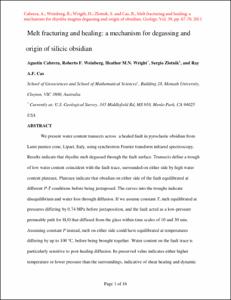 Cas, Ray A.F.
Document typeArticle
Rights accessOpen Access
Abstract
We present water content transects across a healed fault in pyroclastic obsidian from Lami pumice cone, Lipari, Italy, using synchrotron Fourier transform infrared spectroscopy. Results indicate that rhyolite melt degassed through the fault surface. Transects define a trough of low water content coincident with the fault trace, surrounded on either side by high-water-content plateaus. Plateaus indicate that obsidian on either side of the fault equilibrated at different pressure-temperature (P-T) conditions before being juxtaposed. The curves into the troughs indicate disequilibrium and water loss through diffusion. If we assume constant T, melt equilibrated at pressures differing by 0.74 MPa before juxtaposition, and the fault acted as a low-P permeable path for H2O that diffused from the glass within time scales of 10 and 30 min. Assuming constant P instead, melt on either side could have equilibrated at temperatures differing by as much as 100 °C, before being brought together. Water content on the fault trace is particularly sensitive to post-healing diffusion. Its preserved value indicates either higher temperature or lower pressure than the surroundings, indicative of shear heating and dynamic decompression. Our results reveal that water contents of obsidian on either side of the faults equilibrated under different P-T conditions and were out of equilibrium with each other when they were juxtaposed due to faulting immediately before the system was quenched. Degassing due to faulting could be linked to cyclical seismic activity and general degassing during silicic volcanic activity, and could be an efficient mechanism of producing low-water-content obsidian.
CitationCabrera, A., Weinberg, R., Wright, H., Zlotnik, S., Cas, R. Melt fracturing and healing: a mechanism for rhyolite magma degassing and origin of obsidian. "Geology", 2011, vol. 39, núm. 6, p. 67-70.
URIhttp://hdl.handle.net/2117/90728
DOI10.1130/G31355.1
ISSN0091-7613
Publisher versionhttp://dx.doi.org/10.1130/G31355.1
Collections
Share: