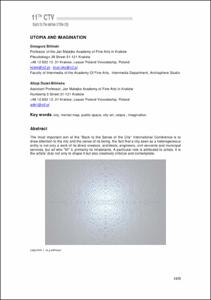 Show full item record
Biliński, Grzegorz
Duzel-Bilińska, Alicja
Document typeConference report
PublisherCentre de Política de Sòl i Valoracions
Rights accessOpen Access
Abstract
The most important aim of the "Back to the Sense of the City" International Conference is to draw attention to the city and the sense of its being, the fact that a city seen as a heterogeneous entity is not only a work of its direct creators: architects, engineers, civil servants and municipal services, but all who "fill" it, primarily its inhabitants. A particular role is attributed to artists. It is the artists’ duty not only to shape it but also creatively criticize and contemplate. Artistic actions understood as the city’s activity and activity in relation to the city have certain qualities of utopian events, manifesting in the unattainability of a goal, idealistic activity base, transience of events and the type of references to it /to the city/. The paper focuses on such interpretative approach to these actions. The meaning of this notion is usually interpreted as a place that does not exist, "... from the Greek outopos (gr. ou - no, topos - a place, non-place, place that does not exist, non-existent) and the eutopia (good place) ". Our statement, built on an idea of an internal dialogue, a dialogue between the main text and the footnotes and quotations, focuses on the changing of the ways of thinking about the city as a work of active art, on the role of an artist, architect, town-planner in this process and their activities seen as special intellectual contribution to the development of this kind of space. It is also a kind of provocation relating to the description of similarities of the artistic and architectural activities in the context of the space of a city.
CitationBiliński, Grzegorz; Duzel-Bilińska, Alicja. Utopia and imagination. A: Virtual City and Territory. "Back to the Sense of the City: International Monograph Book". Barcelona: Centre de Política de Sòl i Valoracions, 2016, p. 1373-1380.
URIhttp://hdl.handle.net/2117/90611
DOI10.5821/ctv.8106
ISBN978-84-8157-660-3
Collections
Share: