Functional urban areas as an essence of the contemporary city 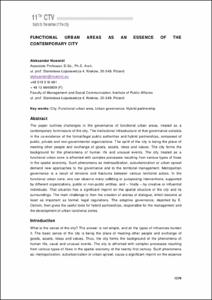 Except where otherwise noted, content on this work is licensed under a Creative Commons license : Attribution-NonCommercial-NoDerivs 3.0 Spain
Abstract
The paper outlines challenges in the governance of functional urban areas, treated as a contemporary form/nature of the city. The institutional infrastructure of that governance consists in the co-existence of the formal/legal public authorities and hybrid partnerships, composed of public, private and non-governmental organizations. The spirit of the city is being the place of meeting other people and exchange of goods, assets, ideas and values. The city forms the background for the phenomena of human life and unusual events. The city treated as a functional urban zone is affronted with complex processes resulting from various types of flows in the spatial economy. Such phenomena as metropolization, suburbanization or urban sprawl demand new approaches to the governance and to the territorial management. Metropolitan governance is a result of tensions and fractures between various territorial actors. In the functional urban zone, one can observe many colliding or juxtaposing interventions, supported by different organizations, public or non-public entities, and – finally – by creative or influential individuals. That situation has a significant imprint on the spatial structure of the city and its surroundings. The main challenge is then the creation of arenas of dialogue, which become at least as important as formal, legal regulations. The adaptive governance, depicted by E. Ostrom, then gives the useful tools for hybrid partnerships, responsible for the management and the development of urban functional zones.
CitationNoworól, Aleksander. Functional urban areas as an essence of the contemporary city. A: Virtual City and Territory. "Back to the Sense of the City: International Monograph Book". Barcelona: Centre de Política de Sòl i Valoracions, 2016, p. 1279-1287.
URIhttp://hdl.handle.net/2117/90609
DOI10.5821/ctv.8104
ISBN978-84-8157-660-3
Collections
Share: