My smartphone is my sense: augmented experience of the city 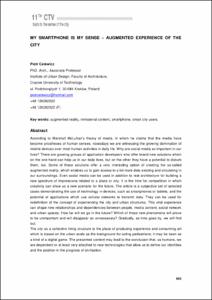 Show full item record
Celewicz, Piotr
Document typeConference report
PublisherCentre de Política de Sòl i Valoracions
Rights accessOpen Access
Abstract
According to Marshall McLuhan's theory of media, in which he claims that the media have become prostheses of human senses, nowadays we are witnessing the growing domination of mobile devices over most human activities in daily life. Why are social media so important in our lives? There are growing groups of application developers who offer brand new solutions which on the one hand can help us in our daily lives, but on the other they have a potential to disturb them, too. Some of these solutions offer a very interesting option of creating the so-called augmented reality, which enables us to gain access to a lot more data existing and circulating in our surroundings. Even social media can be used in addition to real architecture for building a new spectrum of impressions related to a place or city. It is the time for competition in which creativity can show us a new scenario for the future. The article is a subjective set of selected cases demonstrating the use of technology in devices, such as smartphones or tablets, and the potential of applications which use cellular networks to transmit data. They can be used for redefinition of the concept of experiencing the city and urban structures. This viral experience can shape new relationships and dependencies between people, media content, social network and urban spaces. How far will we go in the future? Which of these new phenomena will prove to be unimportant and will disappear as unnecessary? Gradually, as time goes by, we will find out. The city as a collective living structure is the place of producing experience and consuming art which is based on the urban scale as the background for acting pedestrians; it may be seen as a kind of a digital game. The presented content may lead to the conclusion that, as humans, we are dependent or at least very attached to new technologies that allow us to define our identities and the position in the progress of civilisation.
CitationCelewicz, Piotr. My smartphone is my sense: augmented experience of the city. A: Virtual City and Territory. "Back to the Sense of the City: International Monograph Book". Barcelona: Centre de Política de Sòl i Valoracions, 2016, p. 965-975.
URIhttp://hdl.handle.net/2117/90601
DOI10.5821/ctv.8096
ISBN978-84-8157-660-3
Collections
Share: