Halle-Neustadt: the shrinking icon of modernism 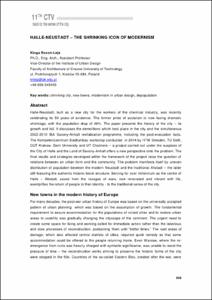 Halle-Neustadt, built as a new city for the workers of the chemical industry, was recently celebrating its 50 years of existence. The former pride of socialism is now facing dramatic shrinkage, with the population drop of 46%. The paper presents the history of the city – its growth and fall. It discusses the demolitions which took place in the city and the simultaneous 2002-2010 IBA Saxony-Anhalt revitalisation programme, including the post-evaluation facts. The Kompetenzzentrum Stadtumbau workshop conducted in 2014 by HTW Dresden, TU Delft, CUT Krakow, Gent University and UT Chalmers – a project carried out under the auspices of the City of Halle and the Land of Saxony-Anhalt offers a new perspective onto the problem. The final results and strategies developed within the framework of the project raise the question of relations between an urban form and the community. The problem manifests itself by uneven distribution of population between the modern Neustadt and the traditional Altstadt – the latter still featuring the authentic historic block structure. Serving for over millennium as the centre of Halle – Altstadt, saved from the ravages of wars, now renovated and vibrant with life, exemplifies the return of people to their identity - to the traditional sense of the city.
CitationRacoń-Leja, Kinga. Halle-Neustadt: the shrinking icon of modernism. A: Virtual City and Territory. "Back to the Sense of the City: International Monograph Book". Barcelona: Centre de Política de Sòl i Valoracions, 2016, p. 906-920.
URIhttp://hdl.handle.net/2117/90598
ISBN978-84-8157-660-3