Attractiveness of small and medium-sized towns as places of residence 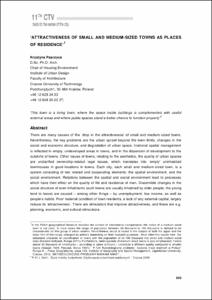 Show full item record
Paprzyca, Krystyna
Document typeConference report
PublisherCentre de Política de Sòl i Valoracions
Rights accessOpen Access
Abstract
There are many causes of the ‘drop in the attractiveness’ of small and medium-sized towns. Nevertheless, the key problems are the urban sprawl beyond the town limits, changes in the social and economic structure, and degradation of urban space. Irrational spatial management is reflected in empty, undeveloped areas in towns, and in the dispersion of development to the outskirts of towns. Other issues of towns, relating to the aesthetics, the quality of urban spaces are unclarified ownership-related legal issues, which translates into ‘empty’ uninhabited townhouses in good locations in towns. Each city, each small and medium-sized town, is a system consisting of two related and cooperating elements: the spatial environment, and the social environment. Relations between the spatial and social environment lead to processes which have their effect on the quality of life and residence of man. Discernible changes in the social structure of town inhabitants (such towns are usually inhabited by older people, the young tend to leave) are caused – among other things – by unemployment, low income, as well as people’s habits. Poor material condition of town residents, a lack of any external capital, largely reduce its ‘attractiveness’. There are stimulators that improve attractiveness, and these are e.g. planning, economic, and cultural stimulators.
CitationPaprzyca, Krystyna. Attractiveness of small and medium-sized towns as places of residence. A: Virtual City and Territory. "Back to the Sense of the City: International Monograph Book". Barcelona: Centre de Política de Sòl i Valoracions, 2016, p. 893-905.
URIhttp://hdl.handle.net/2117/90596
DOI10.5821/ctv.8092
ISBN978-84-8157-660-3
Collections
Share: