Expansion of functions of urban areas to rural areas: the case of Kalwaria Zebrzydowska 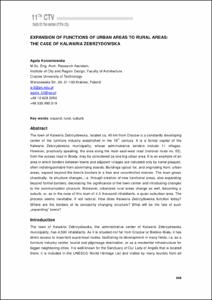 Show full item record
Korzeniowska, Agata
Document typeConference report
PublisherCentre de Política de Sòl i Valoracions
Rights accessOpen Access
Abstract
The town of Kalwaria Zebrzydowska, located ca. 40 km from Cracow is a constantly developing center of the furniture industry established in the 19th century. It is a formal capital of the Kalwaria Zebrzydowska municipality, whose administrative borders include 11 villages. However, practically speaking, the area along the main east-west road (national route no. 52), from the access road in Brody, may be considered as one big urban area. It is an example of an area in which borders between towns and adjacent villages are indicated only by name plaques, often indistinguishable from advertising boards. Buildings typical for, and originating from, urban areas, expand beyond the town’s borders in a free and uncontrolled manner. The town grows chaotically, its structure changes, i.a. through creation of new functional areas, also expanding beyond formal borders, decreasing the significance of the town center and introducing changes to the communication structure. Moreover, urbanized rural areas change as well, becoming a suburb, or, as in the case of this town of 4.5 thousand inhabitants, a quasi-suburban area. The process seems inevitable, if not natural. How does Kalwaria Zebrzydowska function today? Where are the borders of its constantly changing structure? What will be the fate of such "expanding” towns?
CitationKorzeniowska, Agata. Expansion of functions of urban areas to rural areas: the case of Kalwaria Zebrzydowska. A: Virtual City and Territory. "Back to the Sense of the City: International Monograph Book". Barcelona: Centre de Política de Sòl i Valoracions, 2016, p. 868-878.
URIhttp://hdl.handle.net/2117/90593
DOI10.5821/ctv.8090
ISBN978-84-8157-660-3
Collections
Share: