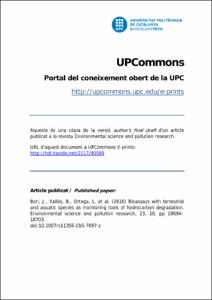 Document typeArticle
Rights accessOpen Access
Abstract
In this study chemical analyses and ecotoxicity tests were applied for the assessment of a heavily hydrocarbon-contaminated soil prior and after the application of a remediation procedure that consisted in the stimulation of soil autochthonous populations of hydrocarbon degraders in static-ventilated biopiles. Terrestrial bioassays were applied in mixtures of test soils and artificial control soil and studied the survival and reproduction of Eisenia fetida and the avoidance response of E. fetida and Folsomia candida. Effects on aquatic organisms were studied by means of acute tests with Vibrio fischeri, Raphidocelis subcapitata, and Daphnia magna performed on aqueous elutriates from test soils. The bioremediation procedure led to a significant reduction in the concentration of hydrocarbons (from 34264 to 3074 mg kg-1, i.e., 91 % decrease) and toxicity although bioassays were not able to report a percentage decrease of toxicity as high as the percentage reduction. Sublethal tests proved the most sensitive terrestrial bioassays and avoidance tests with earthworms and springtails showed potential as monitoring tools of hydrocarbon remediation due to their high sensitivity and short duration. The concentrations of hydrocarbons in water extracts from test soils were 130 and 100 µg L-1 before and after remediation, respectively. Similarly to terrestrial tests, most aquatic bioassays detected a significant reduction in toxicity, which was almost negligible at the end of the treatment. D. magna survival was the most affected by soil elutriates although toxicity to the crustacean was associated to the salinity of the samples rather than to the concentration of hydrocarbons. Ecotoxicity tests with aqueous soil elutriates proved less relevant in the assessment of hydrocarbon-contaminated soils due to the low hydrosolubility of hydrocarbons and the influence of the physicochemical parameters of the aquatic medium
CitationBori, J., Valles, A., Ortega, L., Riva, M. Bioassays with terrestrial and aquatic species as monitoring tools of hydrocarbon degradation. "Environmental science and pollution research", 16 Juny 2016, vol. 23, núm. 18, p. 18694-18703.
URIhttp://hdl.handle.net/2117/90589
DOI10.1007/s11356-016-7097-z
ISSN0944-1344
Publisher versionhttp://link.springer.com/article/10.1007%2Fs11356-016-7097-z
Collections
Share: